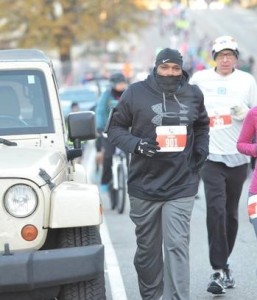 The temperature at the start of the Rocket City Marathon December 10 was 24 degrees and it only got up to 35 by the finish. My right leg held up better than I expected for the first 10 miles but after that it was a tough slog. I finished in 4:55:36 – 20 minutes slower than Marathon for Peace 2015 in Philadelphia and almost a full hour-and-a-half slower than my personal best (3:26:53) at the Napa Valley Marathon in 1999 when I was just 52. My pace was 11 minutes/20 seconds per mile. .

Though this year’s run was slow and cold, I had a smile on my face from the start because your generosity had already pushed the amount of money raised for US Labor against the War over the $7,500 target. And as of this writing the

Now to start training for Marathon for Peace 2017! 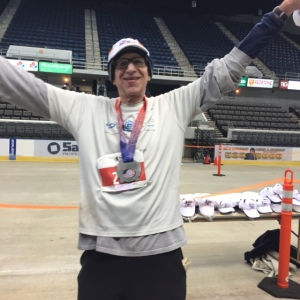 A crucial component of resisting the forces bent on racial and imperial revenge who triumphed November 8 is revitalizing the movement against militarism and war. That’s why I’m running my 11th annual Marathon for Peace and 38th Marathon overall December 10 to raise funds for U.S. Labor Against the War.

Can you pitch in a dollar or two here for each of the Marathon’s 26.2 miles to support USLAW’s vital work?

Just in the last year, USLAW has been in the thick of efforts to achieve a peaceful resolution to the conflicts in Syria, Iraq, Afghanistan and Yemen; support the nuclear deal with Iran; act in solidarity with the Water Protectors at Standing Rock; and take on the connection between militarism and climate change. The group launched a weekly headline news bulletin, and has developed a model resolution and workshop on combating Islamophobia – clearly something that will be of special importance in the coming months and years.

This year’s Marathon will be slower than in previous years. I did run a successful Marathon in Helena Montana in June and finished in the top half of my age group. But since then I’ve been afflicted by a series of problems in my right leg. I’m not going to be back to 100% by race day, so my only commitment time-wise is that I will cross the finish line before they take it down.

But I’ll cross that line with a smile on my face if through your generosity we raise $7,500 so USLAW can intensify its work against racism, militarism, climate change and war.

Thanks, Peace and Hope!

P.S.: Like all of you I’ve been in intense conversations about the election results and the most effective course of action going forward. We face the urgent challenge of defending those communities that the new administration will attack first and hardest and, thinking ahead, organizing to scale so that Donald Trump is only a one term President. Here are a few articles I’ve found especially useful in tackling these issues:

Statement from Political Research Associates on the 2016 Election, by Tarso Ramos, PRA

Notes from a Very Close Election, by Bill Fletcher Jr.

This Wasn’t a Working-Class Revolt. It Was a White Revolt, By Tamara Draut

Trump’s Victory Is a Wake-Up Call to the Left, by Lynn Koh