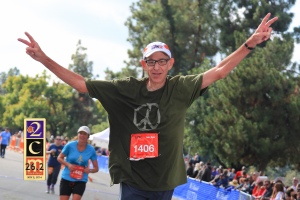 Marathon 2014 for USLAW: A Change Is Gonna Come

Running for Peace and to support US Labor Against the War provided a lot of motivation.
And nothing beats being paced those last tough miles by my son James; being cheered across the finish line by my partner Ellen; and especially receiving the support of well more than 100 family members and friends who donated to USLAW or offered words of encouragement.
I finished in 4:26:19. That was good enough to put me in the top half of the race field overall (187th of 387 runners) and fourth out of seven in a very tough 65-69-year-old men’s division. (For the running enthusiasts among you, my pace was 10 minutes, 10 seconds per mile, and according to the age adjusted charts, my finishing time is the equivalent of a 30-year-old man running 3:21:10.)

On the crucial fundraising side, thanks to the generosity of so many of you, US Labor Against the War has received over $6,500. It would be great to push that number over $7,000. [Final total: $8,199..] So if any more of you can pitch in, you can donate here or via the USLAW pre-race message below.

A Change Is Gonna Come.

Thanks, Peace – and See You Next Year,

Eight years ago, I began the message announcing my first Marathon for Peace with these words:

“I was born by the river in a little tent
And just like the river, I’ve been running ever since
It’s been a long time coming
But I know a change is gonna come.” – Sam Cooke

” A Change Is Gonna Come ” was one of my favorite anthems back in the 1960s. Its words seem just as relevant today. None of us can sing like Sam Cooke. But we can still raise our less-melodic voices loudly against Washington’s agenda of permanent war, empire building, and racism at this urgent moment.

Our actions have been able to change some things since 2006. But war, empire-building and racism are still running rampant. The fight against them is as urgent as ever.

U.S. Labor Against the War is in the thick of that fight. So I’m running my ninth annual Marathon for Peace for USLAW on November 2, and asking each of you to donate a dollar or more for each of the race’s 26.2 miles to support their work. I’m especially excited about USLAW’s recently launched, still-a-work-in-progress website. It has a host of interactive features that promise to amplify the efforts of trade union activists and all partisans of peace, justice and a sustainable planet. Your financial support – click here – can help USLAW’s new site reach its tremendous potential. (More information about USLAW’s mission and ten-year track record of struggle is at the bottom of this message.)

When I first marched against war and racism almost 50 years ago I had a different sense of what “a long time coming” meant than I do today. Back then I was thinking freedom and peace might come within a few years, maybe a decade or two if the breaks went against us. But understanding that I misjudged the time-frame hasn’t diminished my enthusiasm for the task one bit. I suspect running 34 marathons starting in my late 40s has influenced my perspective as well. My pace has slowed since my first Marathon for Peace (3:54:47) not to mention since my fastest race (3:26:53 at age 51). But along with slower times has come greater appreciation of how much every single step, no matter how slow or how small, is absolutely crucial for getting to the end goal.

It’s the same with the path to peace and justice. I’m fortunate to walk that road with all of you who are getting this message – a community of dedicated, talented people who believe in the dignity of every human being and the importance of making a difference. Here’s another chance to do so: you can donate to USLAW by going here, and cheer me on in the Two Cities Marathon (Fresno and Clovis California) on November 2.

U.S. Labor Against the War (USLAW) is a national organization of unions and other labor organizations founded in January of 2003 to oppose President George Bush’s threatened war on Iraq. In more than a decade since, USLAW has organized a network of 165 unions, labor councils, state labor federations, allied labor organizations and labor antiwar committees. USLAW is internationally recognized for its solidarity work in support of Iraqi unions and led the campaign to get the AFL-CIO to come out against the Iraq war in 2005.

USLAW has a ten-year track record of struggles and triumphs that you can find here.
Please donate to USLAW here today!