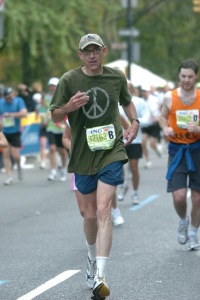 Thanks so much to all of you who offered words of support (and contributed over $3,000 so far) for helping make my 2008 Marathon for Peace a big success. This run was a great prelude to experiencing the historic moment we all shared with people across the country and the world the following Tuesday night.

The New York City Marathon lived up to its billing as among the most exciting marathons in the world. The energy of almost 40,000 runners and two million spectators; a fantastic course through all five New York boroughs; an exhilarating final few miles through Central Park on a gorgeous fall day. And it was a special treat to hear thousands of spectators shout “Go Peace Guy” as I passed by in my Peace T-shirt.

Time-wise it was my second slowest marathon, but I still managed 4:17:50, running an even 9:50/mile pace the whole way. That put me in the top half of the field overall and the top 28% of men in the 60-64-years-old age group. I finished in the top 56% of male runners of all ages.

The runner’s high lasted through Tuesday, when it was replaced by an even more powerful flood of emotions. Joining the throngs who poured out into the streets all over the country, my mind kept returning to a comment by Frederick Douglass about the meaning of Abraham Lincoln’s election in 1860: “Lincoln’s election breaks the enchantment, dispels this terrible nightmare, and awakes the nation to the consciousness of new powers and the possibility of a higher destiny than the perpetual bondage to an ignoble fear.” In the minutes after Barack Obama was declared President-elect I could feel people all around me throwing off the yoke of “ignoble fear,” embracing the moment and all those they were celebrating it with, radiating new hope for the future. Public space across the country (and the world) was alive with the sense that this night symbolized both a repudiation of the last eight years’ nightmare and, beyond that, a huge step on the long march away from patterns of injustice rooted in this country for 400 years.

It is a moment of possibility. How much will be realized depends to a great extent on the actions of grassroots activists and the strength of our networks and institutions. Organizers in all social movements are moving quickly; in California, for instance, the movement to regain gay marriage after Prop. 8’s passage is already underway. And all over the country peace activists are preparing for the next round. In that regard, a few more dollars to help build a long-haul (even longer than a marathon) antiwar movement would be a big contribution: you can donate to War Times on-line at http://www.war-times.org or send a check to P.O. Box 22748, Oakland CA 94609. All donations are tax-deductible.

Thanks! A Change Is Gonna Come,

“I was born by the river in a little tent And just like the river I’ve been running ever since It’s been a long time coming But I know a change is gonna come.” – Sam Cooke

Had Sam Cooke not been shot on a tragic day in 1964, he’d be celebrating his 78th birthday next January 22. That’s just two days after we may experience one part of the change he sang for and dreamed of: the inauguration of a Black man as President of the United States.

It will be a milestone. Yet even if it is achieved (and there are going to be many difficult and nasty days between now and November 4) much more is needed to transform Sam Cooke’s lyric from a cry of hope to a living reality throughout this country and the world.

That “more” can only come from determined, grassroots, broad-based movements for equality, justice, peace and environmental protection. Such movements need institutions that are in it for the long haul. With the “long haul” in mind, I will be running 26.2 miles in the New York City Marathon November 2 to support the antiwar institution I’ve worked with the last seven years, War Times/Tiempo de Guerras. You can check out War Times materials, including my most recent Month in Review – “The Financial Mess & Washington’s Wars” – at http://www.war-times.org

This will be my 24th Marathon and the third year in a row I’ve run a Marathon for Peace. Age and wear-and-tear on the body are slowing me down: the time of 3 hours, 54 minutes I ran in Sacramento in 2006 is off the table; I’ll be lucky to match the 4:09 I ran at mile-high altitude in Utah in my first marathon after turning 60 last fall.

But whatever my pace, I’ll have maximum motivation with your help and support. You can pitch in by donating a dollar (or more) for each mile of the race to help build a durable, long-haul antiwar movement. All donations are tax-deductible, you can donate on-line at http://www.war-times.org or send a check to War Times (new address), P.O. Box 22748, Oakland CA 94609.

You are also invited to come to a POST-MARATHON PARTY if you will be in the New York area November 2. The bash will be Sunday from 5:30-7:30 pm at the United for Peace and Justice office, 630 9th Avenue, Suite 215B (between 44th and 45th). We’ll make a pitch for funds there too; all monies raised at that gathering will be split 50/50 between UFPJ and War Times.

It is a blessing and a source of hope to be connected to so many wonderful people trying to make a difference. I hope you are well; thanks for any support you can provide this Marathon for Peace effort.

A Change Is Gonna Come,